Several years ago, I (Jennifer) started the habit of regularly writing and sending emails to loved ones regarding what we discovered while traveling. They continued during our wanderings of the Pacific Northwest, when we were searching for a house. For several years, we visited the region and toured a vast number of homes around Port Angeles; near and in Poulsbo; on Bainbridge, Vashon, Whidbey and Samish Islands; all along the mainland; and the San Juan Islands. We finally chose Orcas Island, and I started a new set of letters. This is the first of those.

It is currently 10:22pm here, and there are still sunset colors in the sky and light reflecting off the water! Several nights ago, we noticed two very bright “stars” in the northwest. Steve pulled out his cell phone and got into an “app” where you can point the phone up anywhere and learn about what we’re seeing in that particular portion of the sky. The two bright spots turned out to be Venus and Jupiter! We also confirmed that what we thought was the “Big Dipper” (Ursa Major) really is over that direction and pointing to the North Star in the “Little Dipper” like it always does in Nebraska. So, we learned where “north” is, at least on Orcas Island.

Truly, the sky works differently here than in Nebraska! The sun and moon rise and set in weird locations, and it stays light enough to see outside for about an hour and a half AFTER the sun has fallen below the horizon….well, unless you’re in the dense forest behind our house. On the same night we discovered Venus and Jupiter, we enjoyed watching the Celebrity Cruise ship “Infinity” float quietly by, its many lights all aglow and festive-looking.

So far, we can enjoy time on the deck without bug bites. We’re told by a few locals that there are no mosquitoes on-island, but we’re skeptical. Folks back in Nebraska say the mosquitoes there are thick this year. Perhaps, here, the multitude of dragonflies, bats and swallows take care of that for us.

Among the trees in front of the house, on a warm afternoon, a swarm of dragonflies are usually flitting about. In our dry region of Nebraska, we generally see one or two dragonflies at a time, but only once in a while. Here on Orcas, there is a healthy multitude every day. They don’t seem preoccupied by the swooping, darting swallows overhead, though. I think a pair of swallows have a nest under one of our roof tiles at the peak of the house.  During the day, eagles (some bald) and vultures sail fairly close to the windows sometimes.

Lots of wildlife gets close here. When we’re on the deck at night, the bats have fly-bys to our heads that come within a foot or two at times. There’s a small rock hill next to the main door and garage. When we were pulling into the garage yesterday, we looked up to see an antlered deer resting atop the hill, calmly surveying our progress. It slowly chewed on something and lazily met our gaze, eyeball-to-eyeball, about 8 feet away. Then there are the hummingbirds tweedling about, parking in the trees, chatting mid-air with each other, and mooching from our feeders. Then there was the squirrel, but I’ll tell you more about that later. 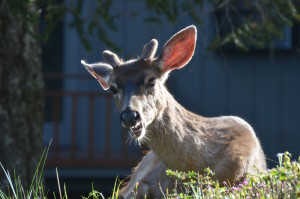 Of course, there are some unique insects here, too. One is the Ten-lined June Beetle, which shows up on our lit windows at night and quivers its fuzzy, fan-shaped antennae at us. Its body is about 1.5 inches long. It makes a weird chattering, hissing sound when I nudge it through the screen on our office window. 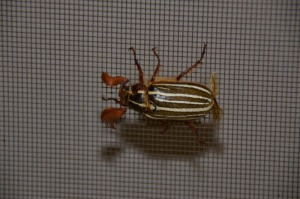 Steve has heard a barred owl this year, but I haven’t yet. Pretty birds, they are, and I like their call. We saw a video of a guy imitating their call via a plastic caller, so we got one. I haven’t perfected the technique quite yet. Of course, it didn’t help that I was giggling so much at the first squawk I created on the thing!  (grin) 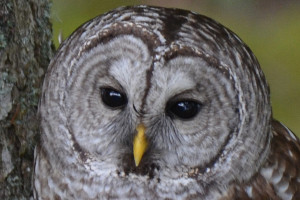 Our house has a south-facing, glass greenhouse attached to the ground floor. So, we Nebraska natives had to get some tomato plants to try in there! Two “Big Beef,” one “Sweet Million” cherry tomato, and one “Juliet” cherry tomato. So far, they are looking healthy. One of the “Big Beef” even has a couple tomatoes developing! We are looking forward to some fresh produce. Our soil outside is too rocky and shaded for growing a garden, but we still greatly enjoy the forest and moss-covered rocks, logs, etc. Keep in mind that anything and anyone lingering too long in one position will soon be coated with a green, living carpet here.

I was in the greenhouse – fertilizing, watering, and gently encouraging the tomato plants – when I heard a small, strange rustling to my left. I looked that direction and through the glass of the door to the outside deck. There, looking back at me through the glass and leaning against the door with its front paws, was a small squirrel. It twitched its furry ears in curiosity and just stared at me for 20-30 seconds before scampering across the deck. You know…I did take one of those online quizzes about what Disney princess I am. It did say I was “Snow White.” Hmmmm. (chuckle) Maybe I’ll go into the forest and start singing so the birds will come alight on my hand. Or, I suppose, dive-bomb my head. It could go either way. Historically, both have happened.

It has been staying pretty cool in the house on the “hot” days. (Their much-appreciated definition of “hot” here is in the low eighties.) At night, we open up all the screened windows then close them in the late morning. The cool from the night is preserved through the heat of the afternoon, then. We have an air conditioner, but we are thankful not to have to use it very often. The past couple days, it has only gotten up to the mid-sixties during the day. We even turned on our electric blanket a couple of nights! Such a relief to be here where the weather is so mild-mannered and civil.

We enjoy watching the tide come in and go out during the day. Last weekend was free fishing and shell-fishing. So, at low tide, a line of people were “clamming” out in the low-tide mud of east sound (the “bay” we can see through our west-facing windows). The oyster beds there show up well at low tide, too. We’re told that local restaurants serve locally-caught seafood. We see fishing vessels once in a while but more often see the big container ships, tankers, and vehicle carriers. Once in a while, we’ll see a military ship or patrol boat. There are lots of private boats (including sail boats). Last year, we even saw a couple of tall ships sailing by on their way from Vancouver to Victoria.

We view the waters and islands visible from our windows with more knowledgeable eyes now. A couple nights ago, we went to a presentation by a marine geologist named H. Gary Greene. He studies the sea floor via samples and sonar imagery. Apparently, this whole area is criss-crossed by underwater fault lines. We could also see evidence on the sea floor of past glacial movement, freshwater “burp” upheaval, “whale pits,” activity of water currents, and landslides that dumped areas of soil down into the water. The next day, when we saw a line of white caps only along one area where we remembered there being a fault, it puts a different perspective on such a sight. Caused by a shift in the fault? I don’t know. It lasted several hours anyway.

That’s life in the Pacific Northwest for us lately.  Look for future chapters.  (smile)