In July, we enjoyed visits from family! We took ferry rides, played games while watching the scenery and sunsets through our windows, gaped at the view from Mt Constitution (the smoke had mostly cleared), climbed Turtleback Mountain, made food, beachcombed (and saw algae-camouflaged crabs), wandered Eastsound, visited Obstruction Pass State Park, chatted, and hiked to Cascade Falls in Moran State Park.  Thanks for the fun and adventure, guys!

The nighthawks showed up for both visits, thankfully, and one nephew does a decent imitation of the noise their wings make! Neat! Vultures flew by, but the eagles didn’t. The ten-striped June Beetle showed up for two nephews, and it flew around the house for a while before we captured and released him outside. He was probably too rattled from that experience to show up for the next family’s visit. The latter visitors, however, got to moo at the cows in the valley below Turtleback Mountain. I’m sure those cows now think that birds overhead were mooing at them. Hmmmm…maybe they were cowbirds!  (smile)  [Couldn’t help it. Had to be said.]  The barred owls didn’t make their presence known while either group was here, but they’ve hooted several times since. Of course, the manic squirrel in the tree just outside our bedroom window didn’t start up his rapid-fire, high-pitched, long spells of chirping until after all witnesses were gone. Crazy fellow. If an unmarked, madly vibrating, chirruping package arrives on your doorstep, open it outside.

We attended the steampunk festival, the Orcas Island fly-in and the Library Fair, so more on those later.

Now, though, we need to do some more comparisons.

When we first got to Orcas Island in early June, we decided to get some tomatoes to put in our greenhouse.  [The rocky forest floor wouldn’t provide much nourishment for them.] This is what they looked like a couple weeks later:

I had never before experienced growing tomatoes in a controlled, sheltered environment like this. They had lots of blooms, but not very many tomatoes coming on. After a little research online, I found a forum where people were saying such plants would need pollination help from the gardener since there is neither indoor wind nor insects to do it. They suggested tapping lightly on the blossoms. We did some of that, and we blew on them, too. Sure enough, tomatoes began to show.  And, over the next couple months, the plants themselves reached the roof. The branches, though, were spindly and weighed down by the fruit — to the point we had to start tying up the branches on the green stakes you see.  So, in late July, this is what they looked like: 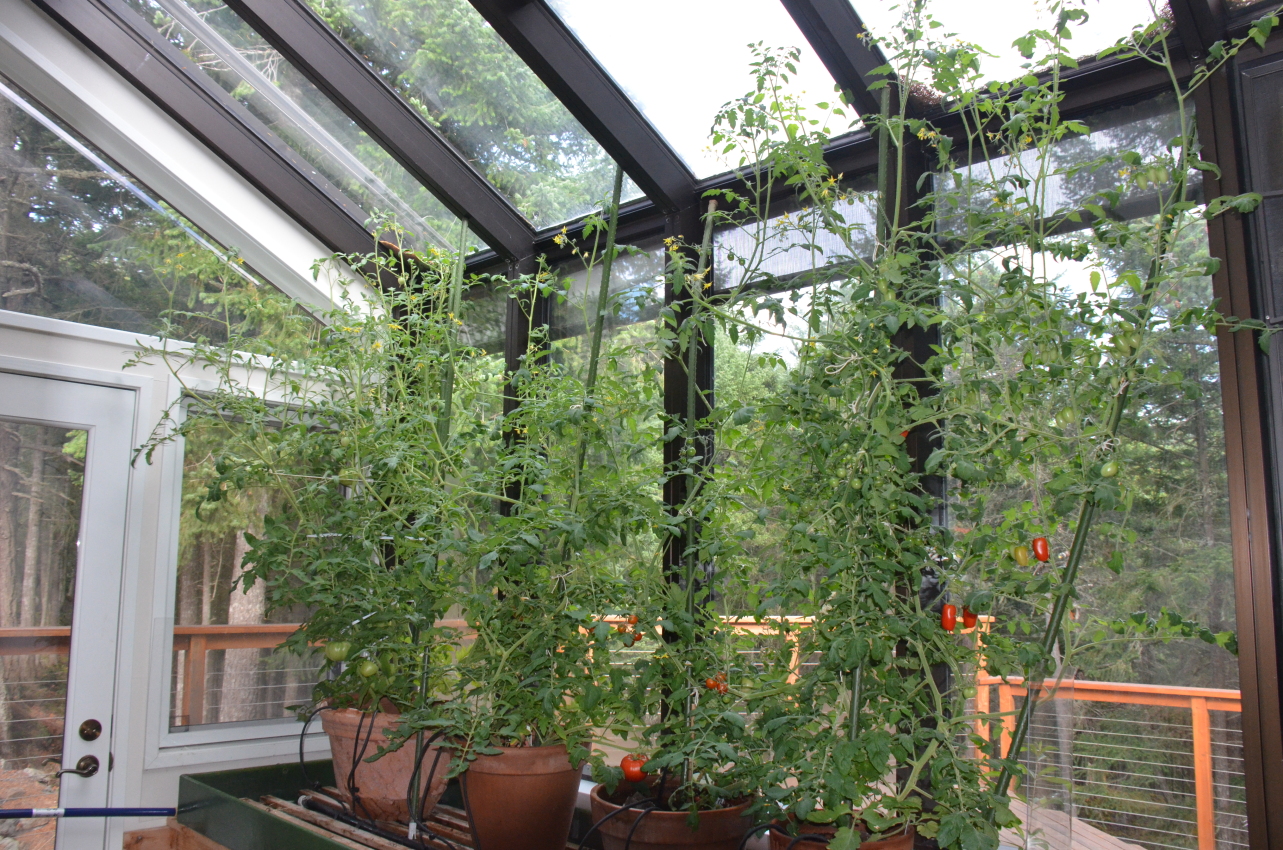 We grew tomatoes outside in Nebraska — some of the same kinds as you see here. The soil there is perfect for them, especially when fertilized with their favorite barnyard waste. (grin) I don’t know whether it is simply a matter of being outside that made them sturdier or the fact they had to grow strong in order to withstand the pounding winds, but their branches and main stalks were stout. They didn’t grow tall, but there was lots of fruit on them. When it came time to pull up the plant that had died back in winter, one nearly needed a wench to dislodge it!

Nebraska tomatoes weren’t invincible, of course. When a thunderstorm rolled in, we often had to race out to cover the plants. Sheltering vehicles, animals, and anything else you don’t want pummeled is also prudent. One cannot shelter an entire house, of course. Here’s what the siding of our house looked like after a hailstorm in June 2011. The green spots are leaves the hail had shredded from the trees, and the rain plastered them to the siding, fence, and other vertical objects:

Hail doesn’t seem to be a concern here on the islands. Even the rain falls lightly — nearly a mist, at times. There, when it rains, it is often a downpour. The accompanying wind makes sheets of water fly by the window at an angle. We haven’t been on the islands in a winter storm yet, but I suspect it won’t be like the spring and summer storms of Nebraska.

Sometimes, there, the rain falls in huge, noisy drops. I heard something here on the deck last week that sounded similar. My first thought was, “Hey, we’re getting big raindrops here?” But, when I looked out, the deck was dry and the sky was clear. My next thought was that maybe the aforementioned, chirpy, mad squirrel was now bombarding us with sticks and cones. But, I didn’t see anything like that raining down.

I walked along the windows until I got closer to the taps. Seeing movement by one of the deck posts, I crept closer to the window and discovered it was a woodpecker tapping its beak into the holes on the posts through which the cables are strung. I’d noticed wasps, bees, and ants wandering into those holes, so he was probably finding a good lunch in there.

One difference mentioned by one of our islander friends is the clouds. She was looking at photos Steve had taken of Nebraska, and I asked her what difference struck her the most. She said it was the big, dark clouds clustering over the Plains, which don’t seem to occur here. True.

Although the storms there sometimes bring hail, damaging winds, floods, tornadoes, and lightning, we both still enjoy a good Nebraska storm. Spring rains pelting the roof make a good lullaby. The natural fireworks streaking the sky outshine anything manmade. The minutes of rolling thunder echoing overhead thrill a body, making one realize just how powerful and mammoth are the forces wafting the planet! 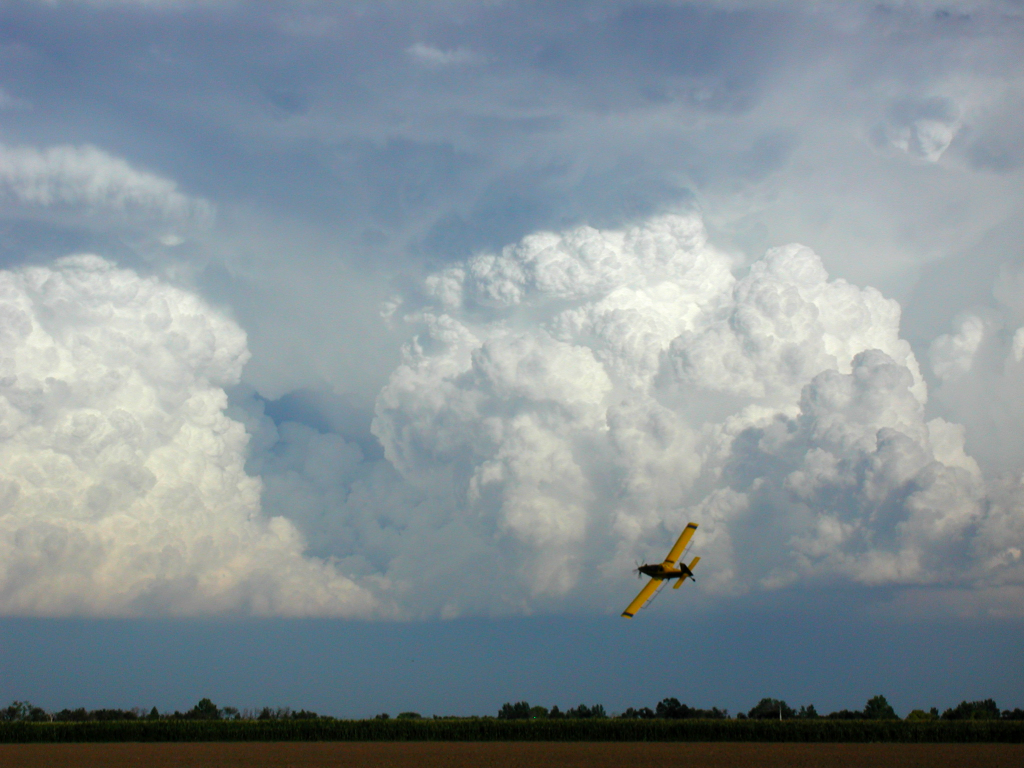