Our Nebraska technology is in a new land. Steve came up with good imagery for the situation this morning as he came back from making a phone call. Several decades ago, there was a television show called, “Green Acres.” A city girl and a country boy got married and moved to isolated farm country. In order to make a phone call, the country boy patiently climbed the telephone pole in their yard. Well, Steve’s smart phone will work from here, if he goes out and stands in the proper spot on the outside deck on the other side of the house from the office. My not-so-smart phone won’t even think about connecting. All it will do is say “Scanning…” then, disgruntled and cranky, go back to sleep. As I write, Steve’s headed out to make another call. I reminded him that he, at least, doesn’t have to cling to the top of a pole with his legs while holding the phone in one hand, balancing the laptop on one knee, and typing with the other hand. We’ll need to go to the mainland to get a different phone that might work here. 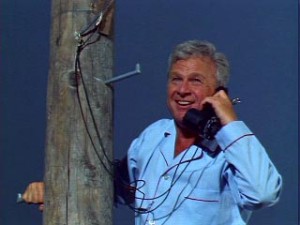 All photos on page are by Steve Smith, except this one.

Yesterday, we’re pretty sure we saw the top of a submarine above the water line.  It was funneling swiftly through the water toward the north. Hopefully my computer doesn’t get seized because Big Brother is reading this and I just exposed some secret mission to invade Canada. Steve might be in trouble, too, for he took the photo. 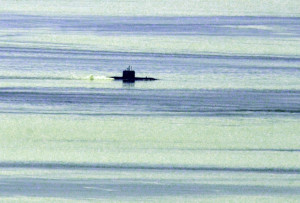 We also witnessed the delivery of several houses, each on its own barge being pulled by a tug boat. We didn’t get to see the houses being removed from the barges; trees were between us and that sight. We saw empty barges leave the scene, though. Interesting way to start a housing area! 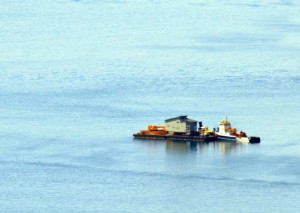 I heard the barred owl last night! So, tonight, I shall have them help me learn to call back. Hopefully, they don’t throw up their wings, give up on me, and leave!

We also hear something else about 5am lately. A mystery! It is off in the forest toward the southeast. Think of an old wooden porch with a crawlspace underneath. Think of an old wooden chair on that porch. Now, quickly scoot the chair across the floor of the porch, rubbing wood on wood in a short burst of sound that echoes in the crawlspace like a drum. That’s the sound, only through an amplifier. Big, raspy-voiced Saint Barnard in someone’s yard up the hill? Not quite. Giant, hoarse crow angrily squawking at his neighbor? Not that high-pitched. Ah, I know. Bigfoot swam over and is hanging out in our forest, harrumphing until he can find a good resting spot! No, I suppose not. We got to thinking it was the sound of a deer. Steve did some research online and found an audio of deer grunting. That might be it. We have some weird animals around here, including a “pinto” deer freckled with white patches on the rump.  More on such deer here.

Update, June 17:  We went to the deck to watch the sunset. Steve took photos while I played around with trying to call the barred owl – not with the plastic duck caller, but rather with my hands like when I call the turtle doves back in Nebraska. I’ve made the turtle dove calls in various spots all across Orcas Island, but there don’t seem to be any. If they were here, they’d come like they do in Nebraska, I’d think. When we were in the Bainbridge Island area a few years ago, they were there. Maybe we can call them when down there again, then slowly make our way back to Orcas while continually calling them. Think they’d follow?

Anyway, tonight, as I was trying to hit the low notes of a barred owl call, the strange Bigfoot deer sound came roaring at us from the forest below us. Hmmmm. So, I hit only the low note again but in a long burst of sound this time. It answered me.

I thought to myself how it was probably good I was up on the deck rather than at deer level. I’d already experienced getting charged by a buck in South Dakota when I was imitating his call.

Feeling safe on the deck, I imitated the call again. There was an answer. This time, though, it came from eye level, right at the tops of the trees. Flying deer?

Another answered from further down the hill, then another behind us. We’re surrounded!

I kept calling. They kept responding, getting closer all the while, and they were definitely making the sound from higher than ground level.

We’d seen some squeaking birds swooping around up high, catching insects. They had a white spot on each wing. Suddenly, the weird sound went booming right by me at deck level. I looked over quickly and saw one of the same birds we’d seen squeaking up high. That sound was coming from a bird! As Steve accurately described it, the boom reminds him of a truck’s engine brakes.

After a little research, we’ve discovered our mystery beast is a Common Nighthawk! 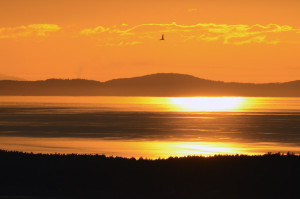 So far, I haven’t been charged by a nighthawk.  Give it time.