My wife, Jennifer, regularly donates blood. This was her first time donating on Orcas Island. So, I decided to tag along and take pictures of the process. The drive was held at the Fire Station. The department clears out the trucks from the garage (thank you!) and lets the blood drive set up in the bays.

Bloodworks Northwest runs the drive for much of the State of Washington. On Wednesday, the team collected blood at Friday Harbor, then started work at 7 AM to set up equipment for this Thursday on Orcas. It takes several hours to set up, and they were ready at 11 AM. Two teams from Bloodworks joined in order to work Friday Harbor and Orcas. On Friday, one team went on to Lopez Island.

Click on any image below in order to enlarge.

First step when visiting is to register. They take your name and contact information. Be sure to bring a photo ID. Registration here was done by helpful volunteers. 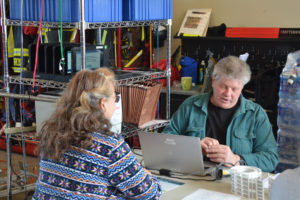 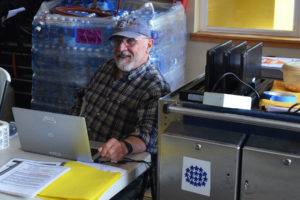 Next, you are given a tablet that allows you to easily answer a set of questions. 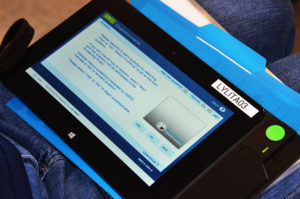 There is a nice laminated booklet that explains the process, tells who they accept blood from, how the money works, and many other things. 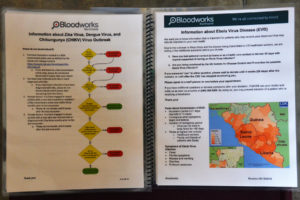 Regarding money, there is no compensation for the donations made. The staff who collects the blood, the supplies used, and the various expenses are compensated for by contracts that Bloodworks Northwest has with the area hospitals.

Once you are finished answering the questions on the tablet, you are taken to a private booth where your blood pressure, temperature, and a blood sample are taken. This is to make sure that you are not running a fever and that your platelet count is good. 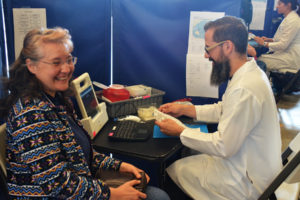 Next, you are escorted over to a chair where you are made comfortable. 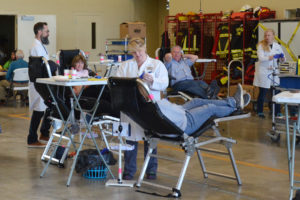 Mark, the Bloodworks Northwest tech who worked with Jennifer, entered her information in another tablet. 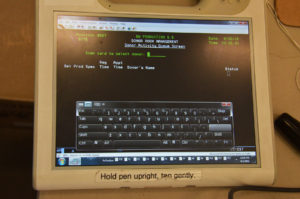 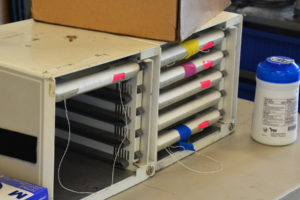 A collection tube is set up and the vein is found. You are given a squeeze toy to help with circulation. 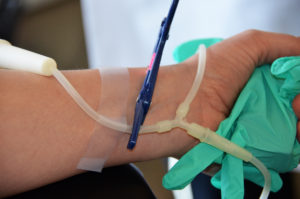 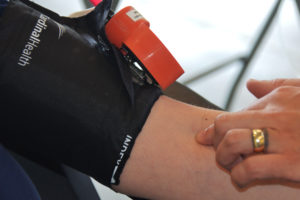 The blood begins to flow into a bag through a device that weighs and rocks the collected blood. The rocking motion keeps the anti-coagulant mixed in.  500 ml is collected from each person, and the actual collection takes less than ten minutes.

The machine automatically stops collection by pinching the hose when it has enough blood by weight. 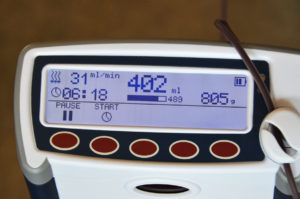 The blood bags are bar-coded with information and placed in an insulated cooler. They will be taken to the airport and flown to Renton for processing. 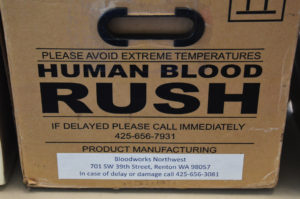 Orcas donors donate about every 3 months and give about 60 to 80 units in the process. Donations drop off in the summer because people are busy, so this is when donations are most helpful.

After giving some blood, you are asked to stick around a while to make sure you don’t get faint or have any other problems. It helps for you to be super-hydrated before you donate as well as replenish your fluids afterward. Volunteers make that easy! There were complimentary snacks and drinks to enjoy while sitting down with neighbors for a leisurely chat. This drive, the 6th grade class made cookies and delivered them while they were still warm! They were much appreciated. 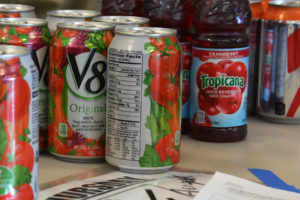 Clarissa Fernandez was manning the snack table. Here, she is handing out a pin to recognize someone who had given twenty times. Another man received his two-gallon pin for giving that much at this location. We found he had given over 15 gallons over the years. He had O negative blood, which can be given to anyone; so his is especially desired. 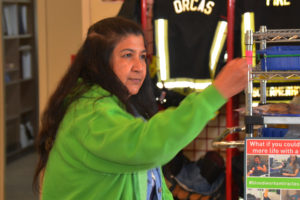 Around noon is a good time to come, as many of the chairs are empty during the lunch hour. 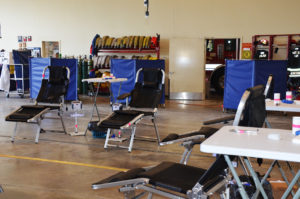 The staff and volunteers are hoping you will come and donate at the next drive on August 4, 2016. Thank you, donors, for what you’ve given already. Thanks, volunteers, for making everything run smoothly. 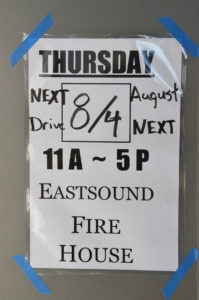 Thanks, Orcas Island Fire and Rescue, for clearing out the Station and making the space available.

A few images from the Eastsound Fire Station: 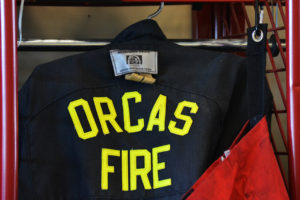 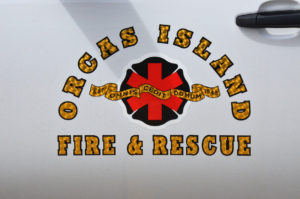 The Latin phrase “est omnis cedit domum” literally translates to “All yields house.” It is used by many fire departments and is said to mean “everybody goes home.” Some say a better way to say this in Latin would be “Omnes cedunt domum.”

I like the information posted on the station doors, showing the number of people trained in CPR and the number of responses so far this year. I think it is a great way to remind the public how much time the many volunteers donate to the community. Orcas fire crews have some challenges due to the island’s horseshoe shape and narrow roads. Yet, there are thankfully seven fire stations here on island. 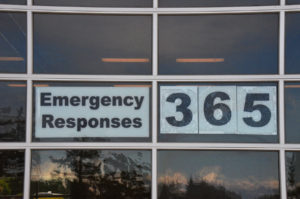 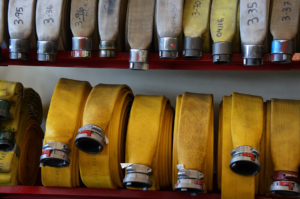