Skip to content
Home » Answers » How did you find Orcas?

How did you find Orcas Island? So far, this is the most common question we get asked when we tell people we just moved here. The short answer is that my climate research placed the San Juan Islands in the running. Then, after visiting many of the communities that have a great climate, we found Orcas to be the best match for our personalities.

The climate was an important element to the decision. There are few places that can match the San Juan Islands for ideal climate. For us, that means the day’s low shouldn’t be below 45 degrees and not above 75 degrees. The place we come from — Imperial, Nebraska — has 10 of these days a year, on average. Orcas Island has 105. There are a few places that have more ideal weather days, but all of them are soggy by comparison. 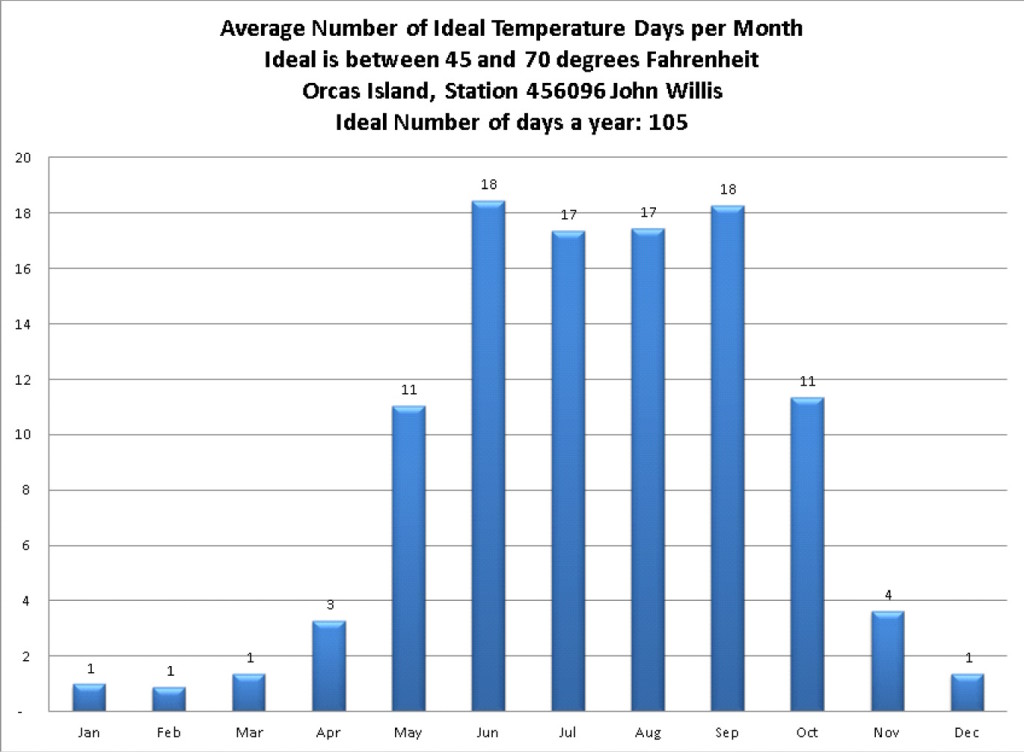 Orcas is unique in that it has enough cold days for it to freeze once in a while. A bit of cold is a good thing; but, not too much. There have been only 3 days in the last 121 years where the temperature dropped below zero.

Climate isn’t the only consideration. What is the community like? Orcas has the feel of a community. Many of the Oregon towns don’t have the feel of a community but rather a collection of houses where who lives there is in constant flux. In reality, Orcas also has a number of people who come and go; but, there is a large core group that stays and gives the area its character. We like that character, even though it is very different from where we come from.

There are three primary questions we get from our friends in Nebraska:
Where are the San Juan Islands?
Isn’t it always rainy there?
Why would you want to live in a place with so many liberals?

The first is easy to answer.

Not too many believe us when we say that it isn’t as wet as they think.

As to why we would want to live with a bunch of people who think differently than many of those in Nebraska, that is harder to answer. Nebraska has its share of liberals, but they are in the minority. Here on Orcas, it appears that liberals have a slight majority.

Orcas is a beautiful place.  It has more trees, water, arts, and activities.  It has a nicer climate and a wider variety of personalities. It is an interesting place, even if some of the people do think differently.