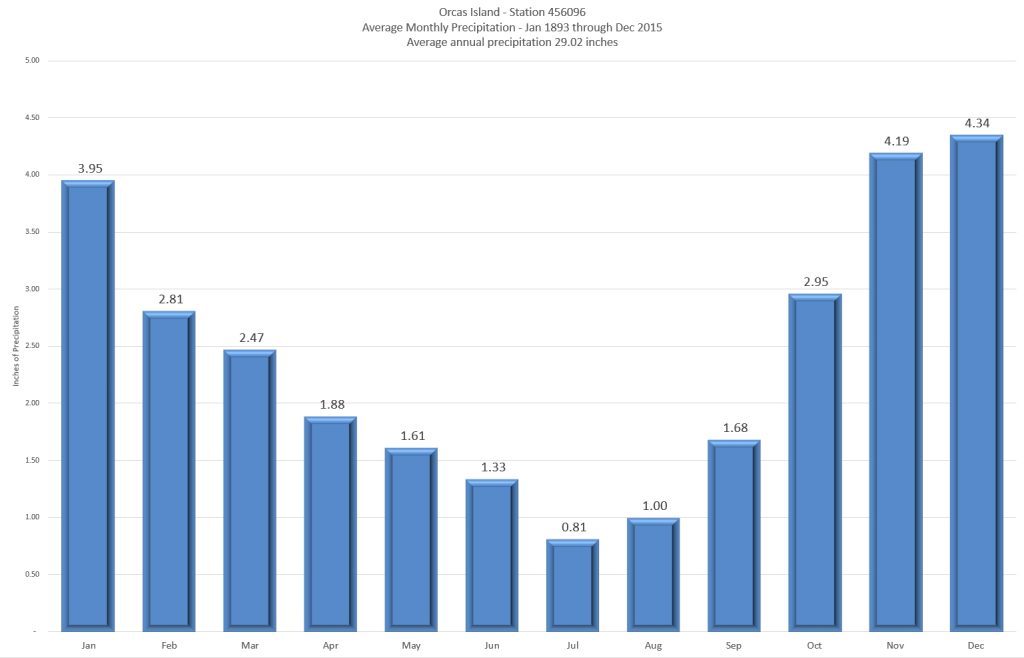 Analysis of weather data for weather station 456096, which is located on John Willis’ property on the southwest side of Orcas Island.  It has the distinction of being the longest continuous set of weather records maintained by a private family in the United States.  For this reason, it is one of the more valuable sets of data in the nation.

The weather records were pulled from http://www.ncdc.noaa.gov/ which maintains a continuous set of error-corrected data for many of the stations in the nation.  The data was converted from Celsius to Fahrenheit. Days without temperature records were either ignored or set as the average between the two most recent records to allow for nonparametric trend analysis. Days without precipitation data were ignored.  So, if it precipitated on a day without a record, then the total precipitation for that year would be under-reported. Out of the nearly 45,000 days in the period of record, there are only 199 days without temperature records. There are 1,047 without precipitation data.

In most other locations that have been analyzed across the nation, the trend is for the high temperatures to be trending lower and for the low temperatures to be trending higher. Note that this is significantly different than what is reported by the press. In other words, in most locations, the reality is that there is a moderation of temperatures — with highs not being quite as high as they used to be and for lows to be a bit warmer than they used to be.

On Orcas, things are a bit different than the other stations that have been studied. On Orcas, there are more days with colder low temperatures, meaning that the lows are trending colder. Regarding the high temperatures, the trend depends on where you start the trend line. If you go from 1893 to 2013, then the trend is significantly warmer for the highs. But, this is due to the jump in 1925. If you trend from 1925 to 2013, then the trend is cooler.

If you consider temperatures between 45 and 75 to be an ideal range for a day, then Orcas Island is one of the most ideal in the nation.  Approximately, 25% of the days in the year see some precipitation but the vast majority of that is measured between a trace and a quarter of an inch. On average, only three days a year show more than a half inch of precipitation.

Data compiled by Steve Smith. You are welcome to a copy of the analysis worksheet or the summary information. Just ask.  Orcas.Art@gmail.com 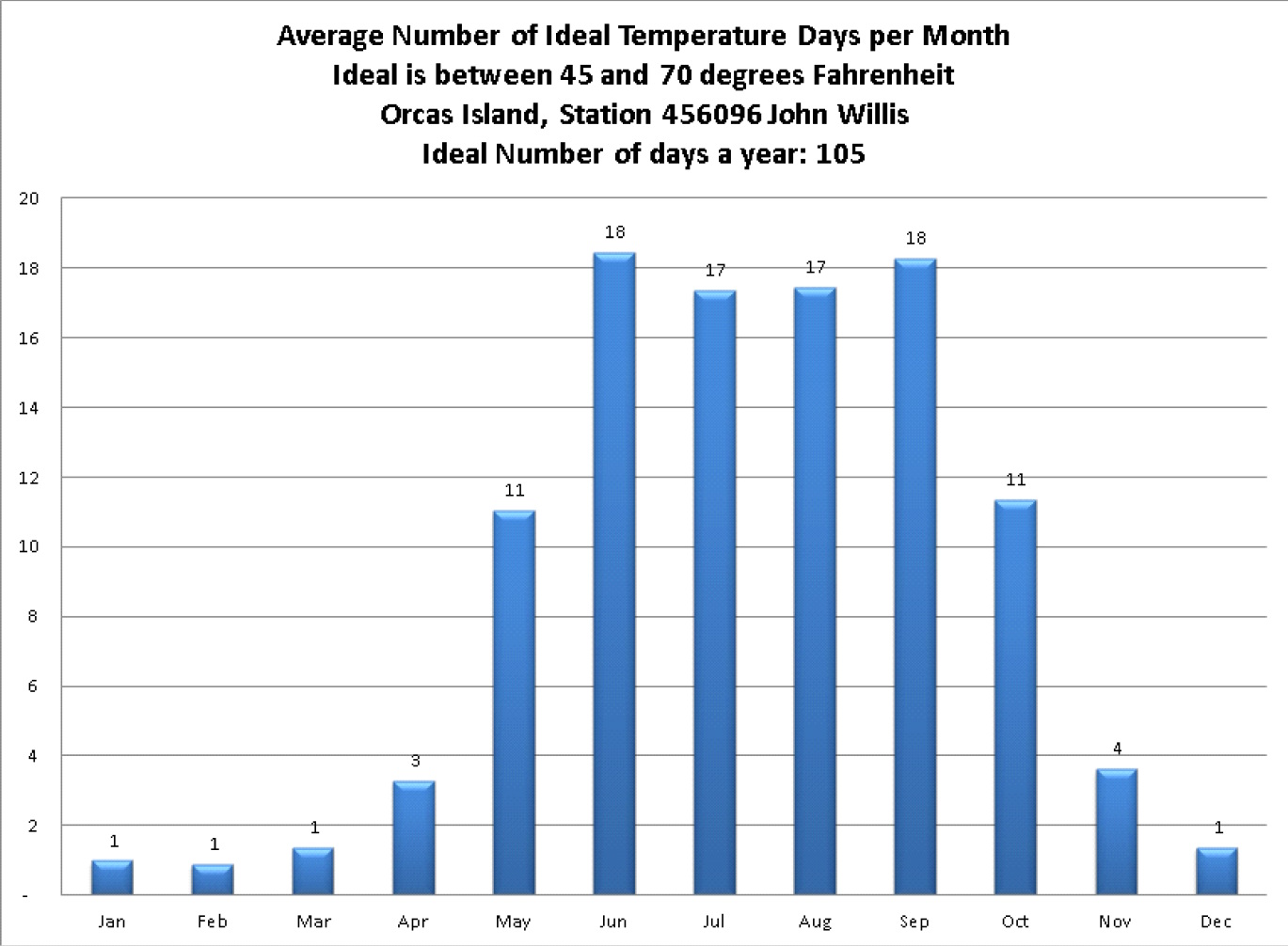 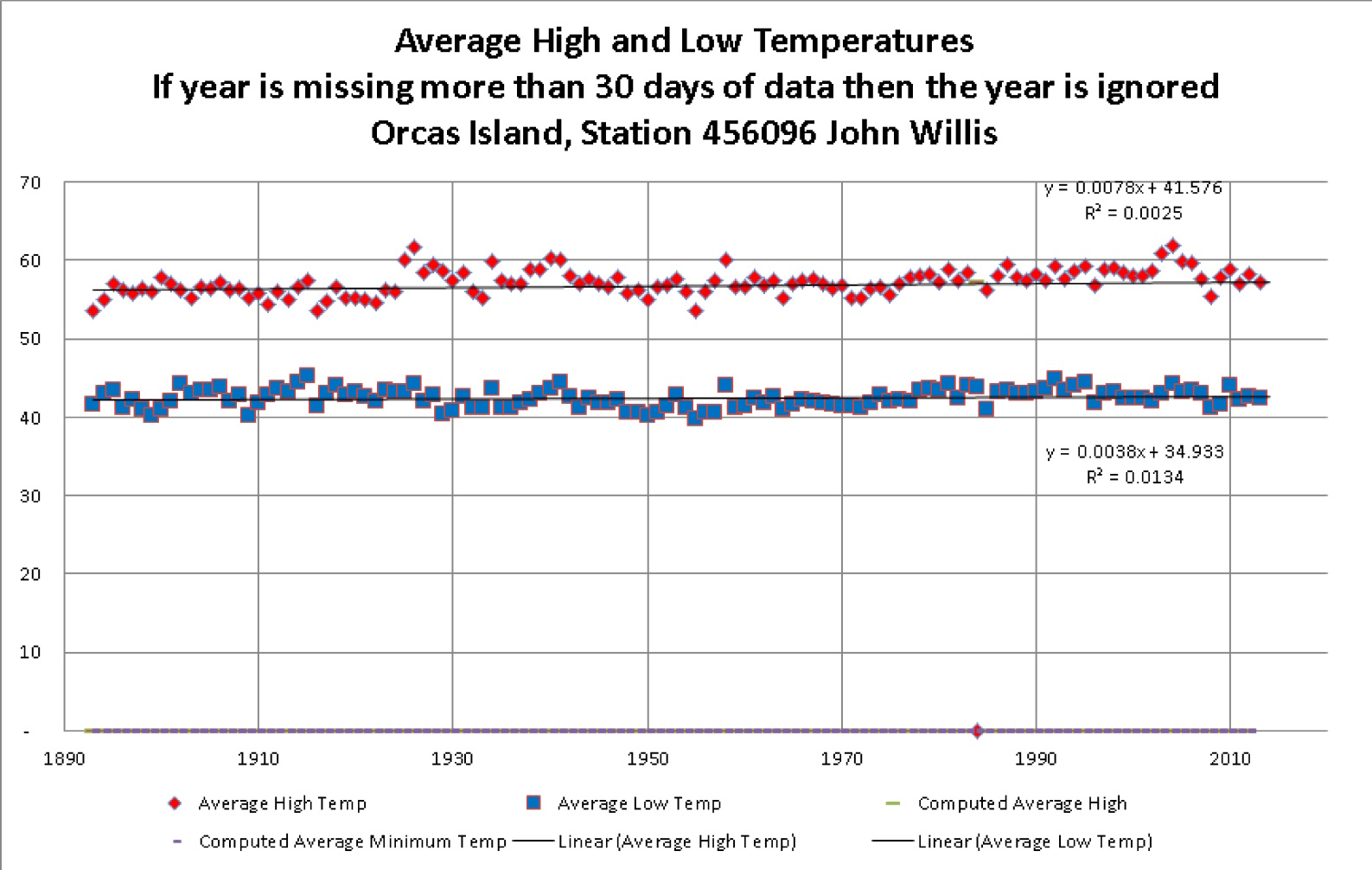 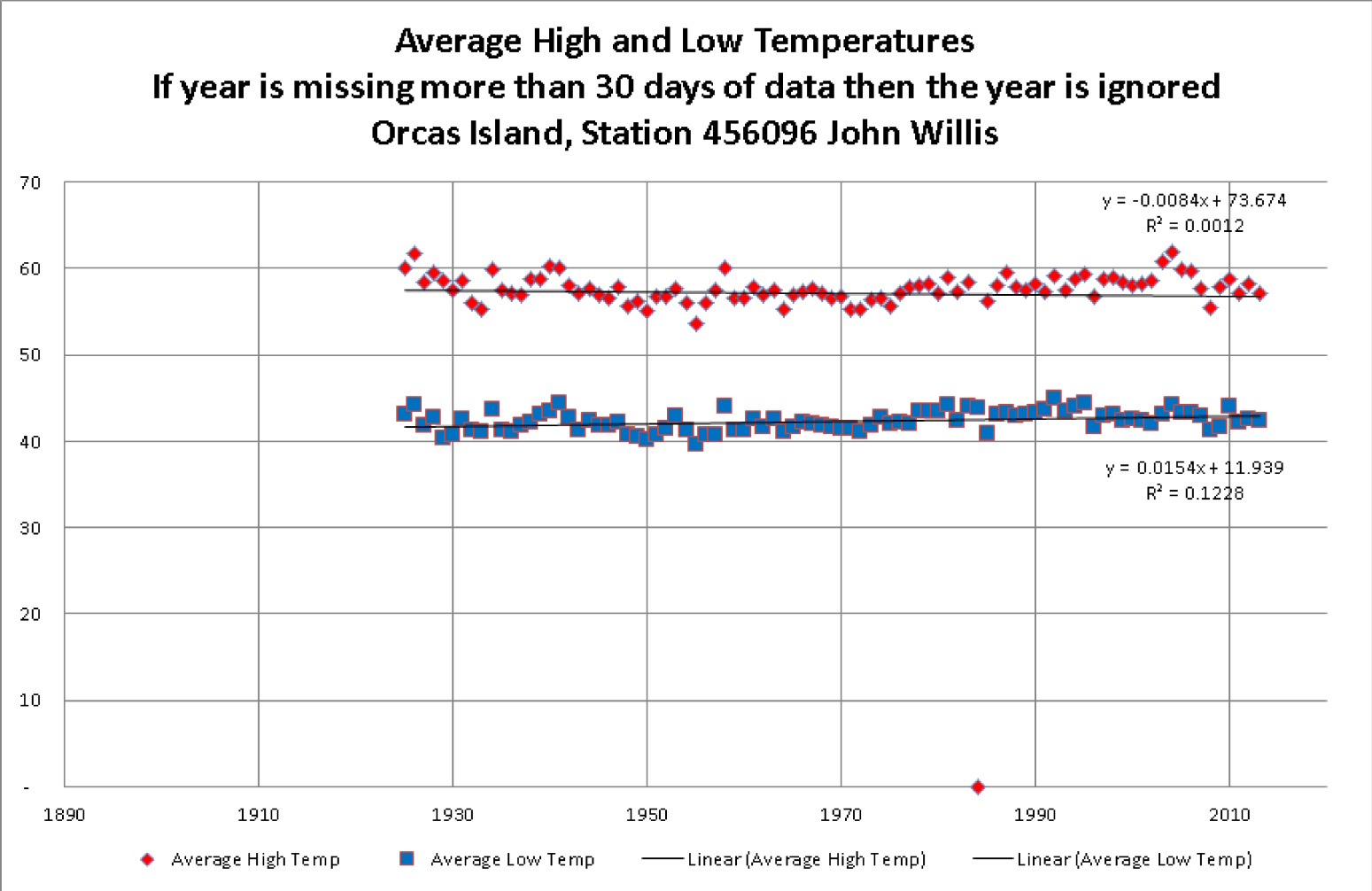 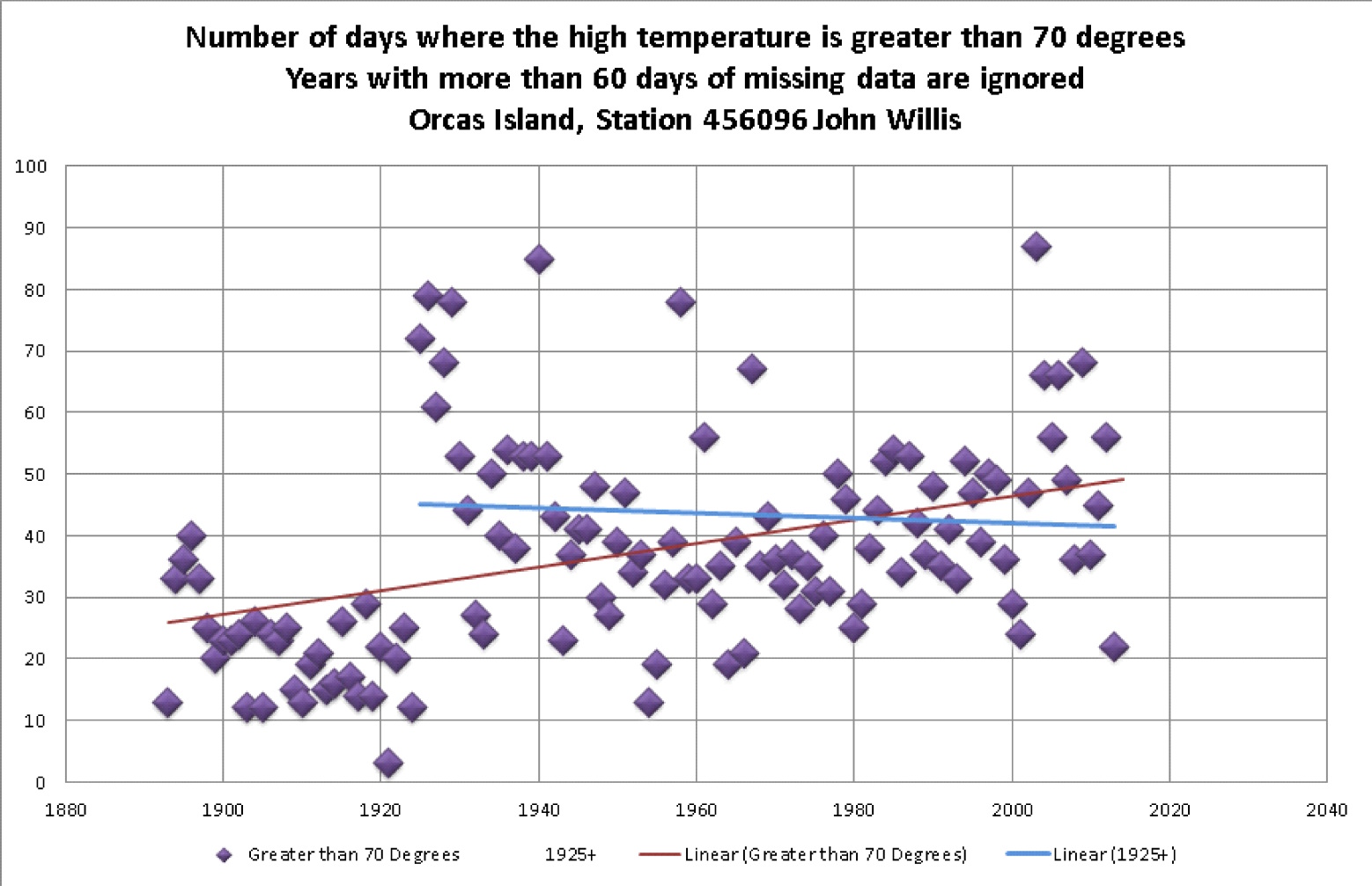 Two trend lines.  One showing the trend for the period of record, 1893-2013.  The second showing the trend since 1925.  One shows a warming trend, the other a cooling trend. In December 1924 the temperature gauge was relocated from a shelter to the porch on the south side of the home.  From that period on the temperature on Orcas Island averaged 2 degrees warmer than during the prior 30 years – a distinction clearly visible in the records.

These are the notes associated with the station.  (provided by Mark Albright, University of Washington, Research Meteorologist)

Apr 1897 temperature was measured on veranda on N side of house.
time of obs 7am, 2pm, 9pm

Apr 1925 Since December temperature measured under roof of S porch of house
after shelter blown over by storm.  New shelter planned in a
few weeks.

Oct 1928 Exposure of temperature equipment is not creditable, as
thermometers are mounted under a porch on S side of residence.
For 3 years shelter has sat out on lawn unused. 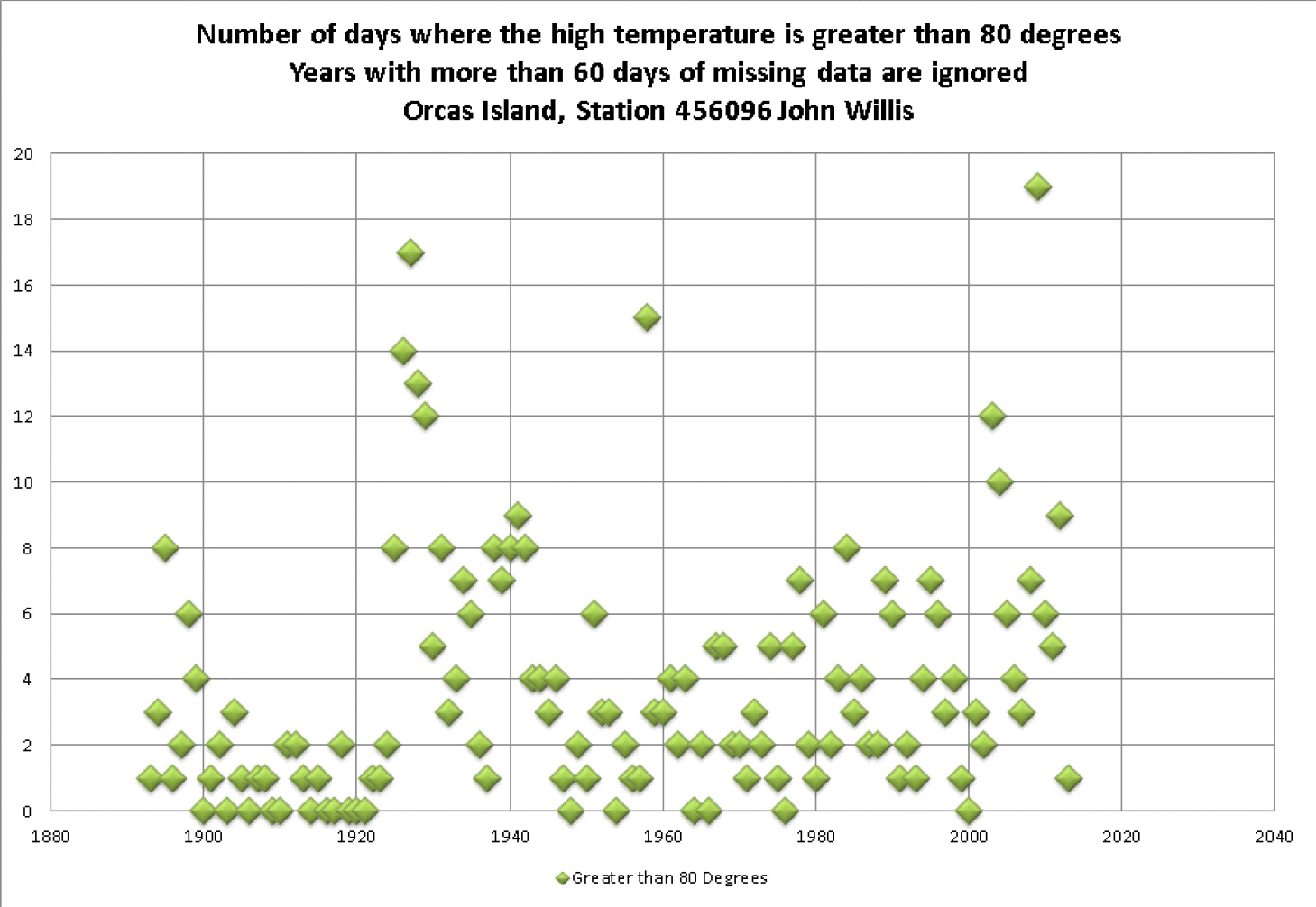 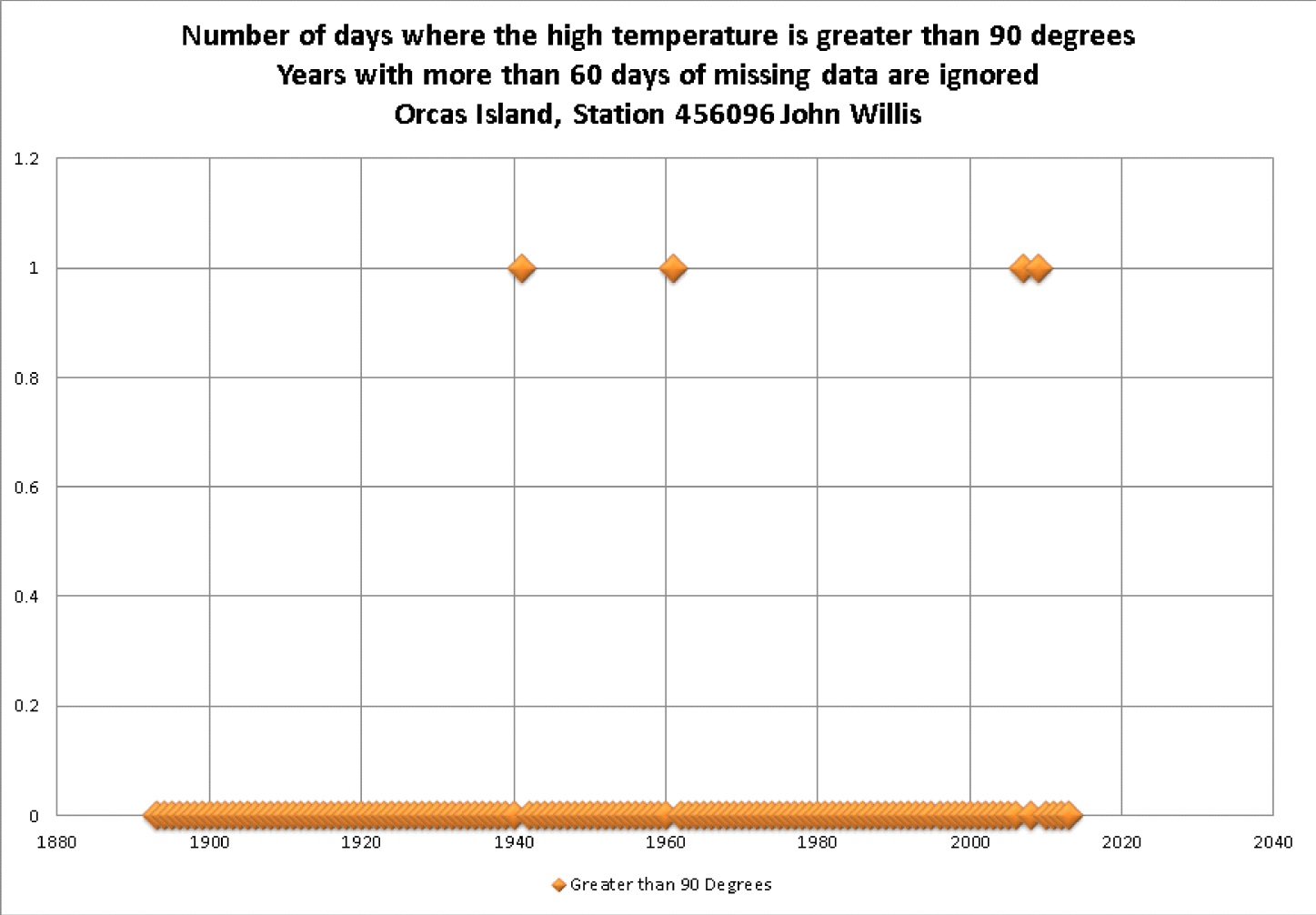 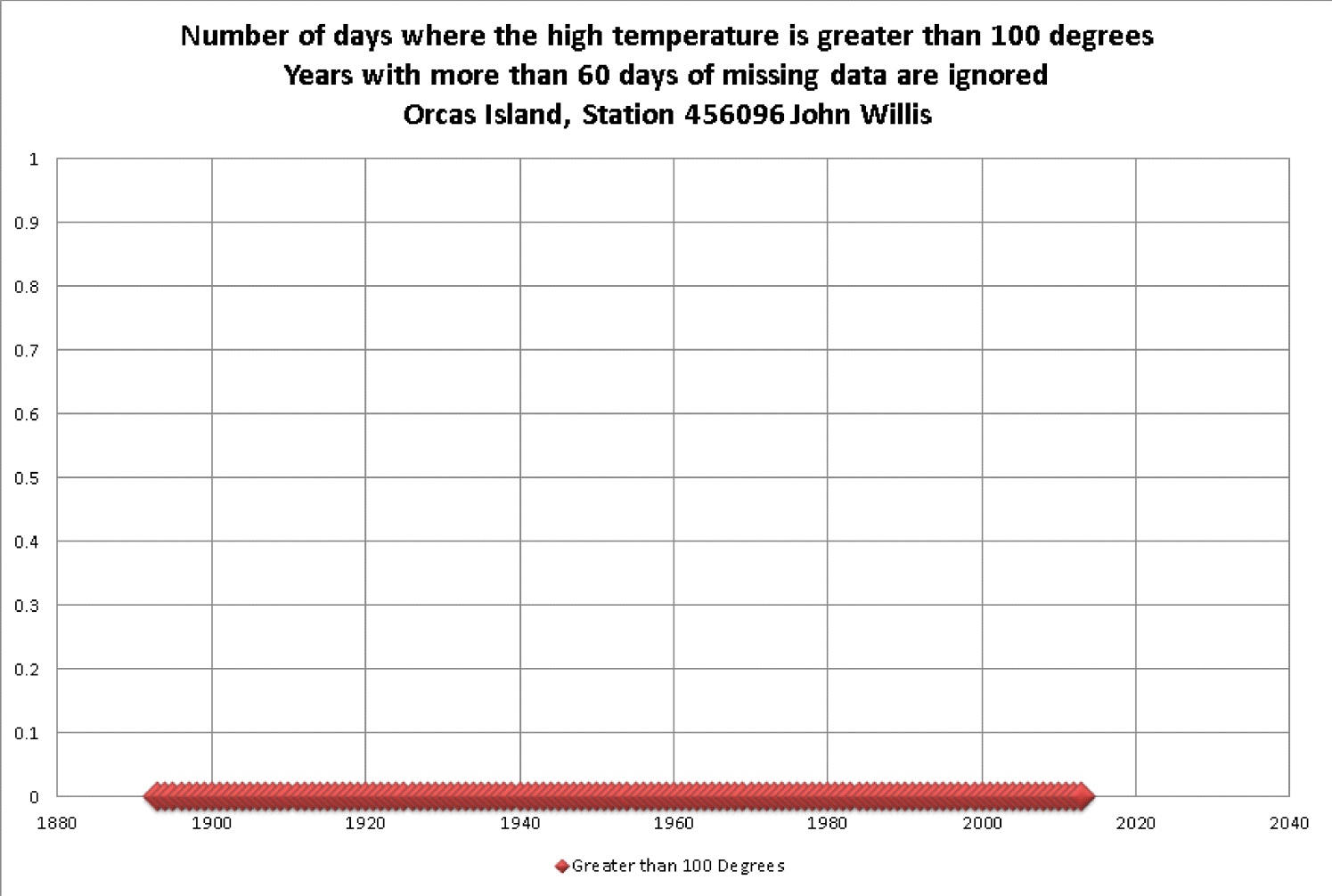 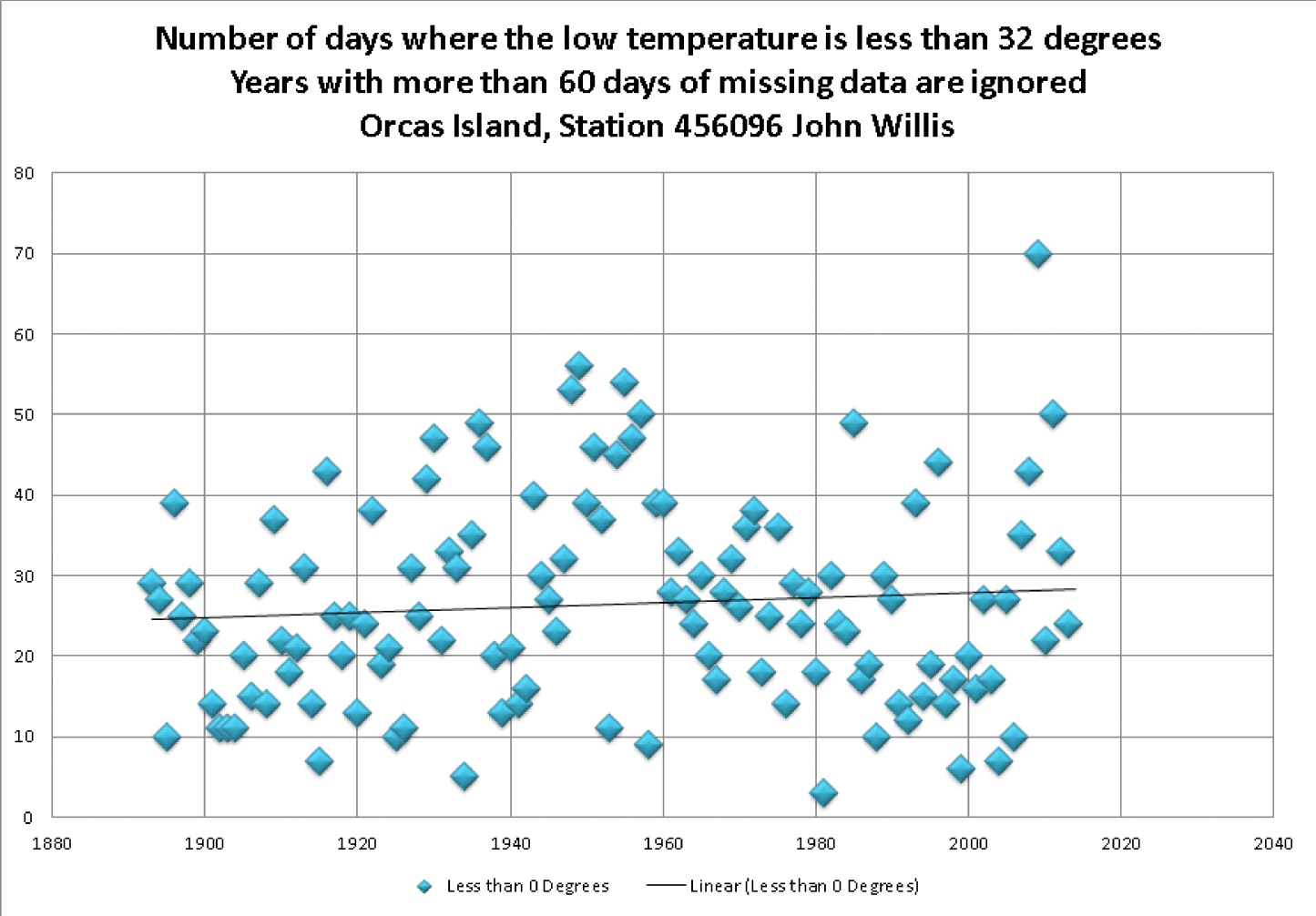 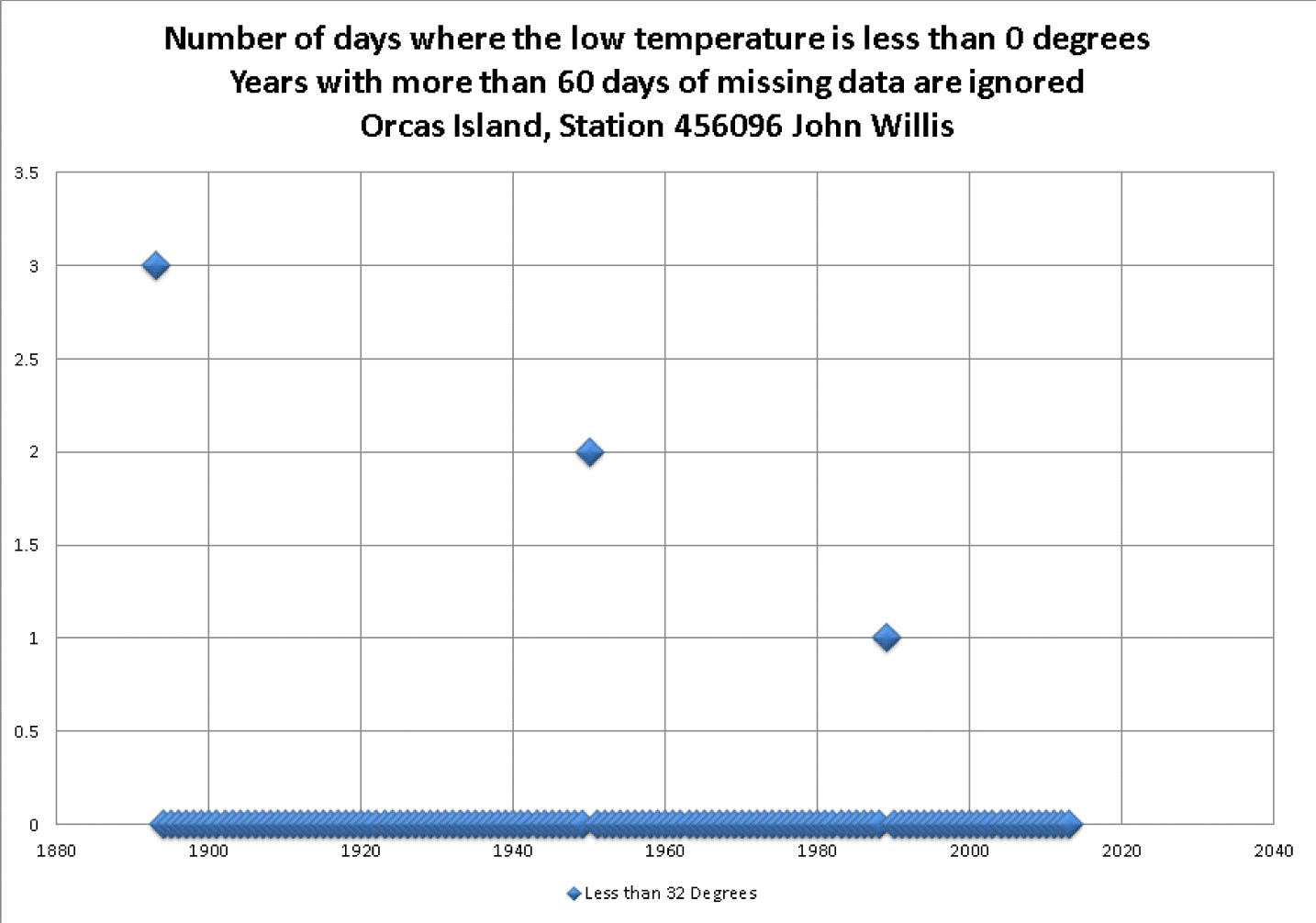 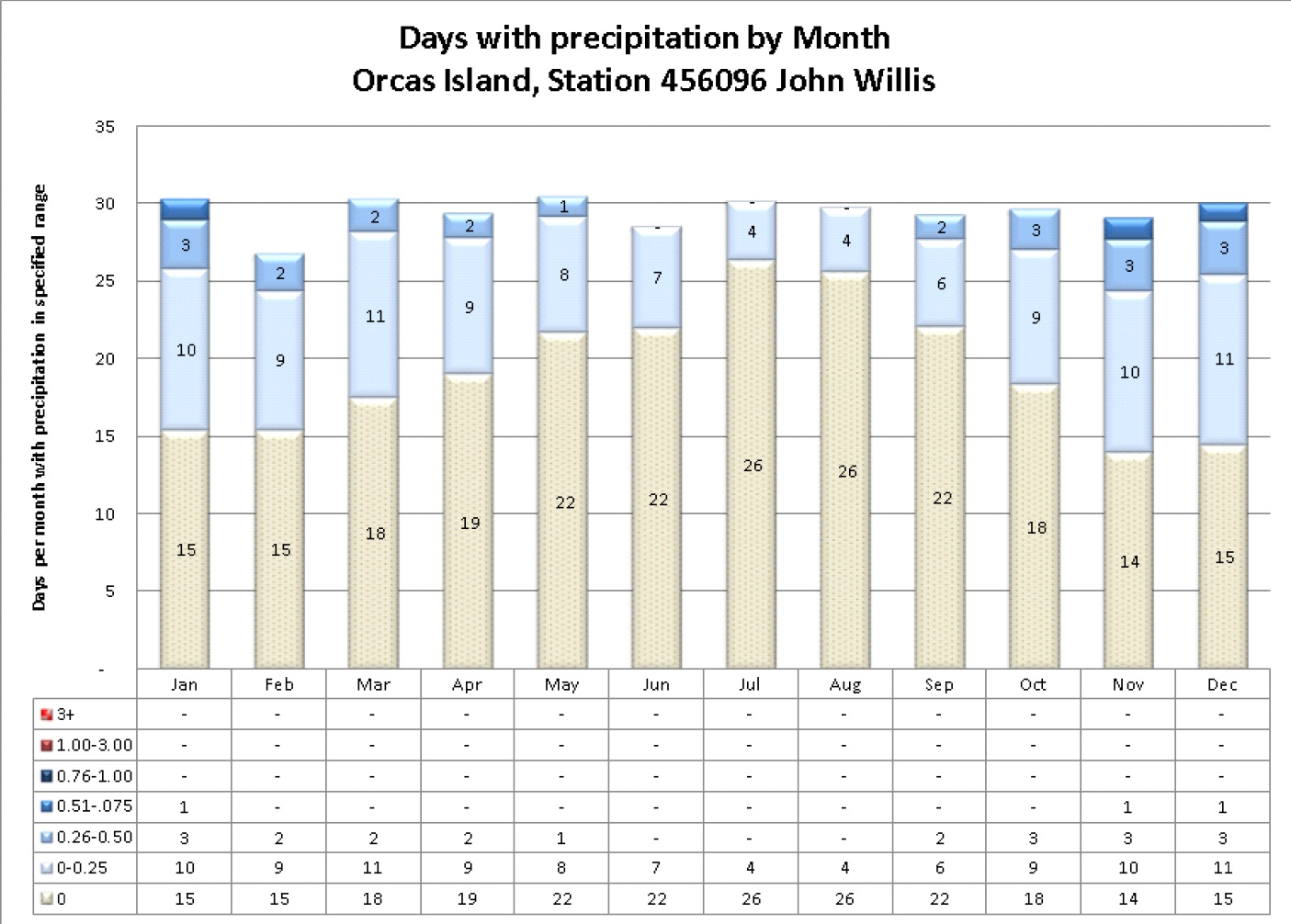 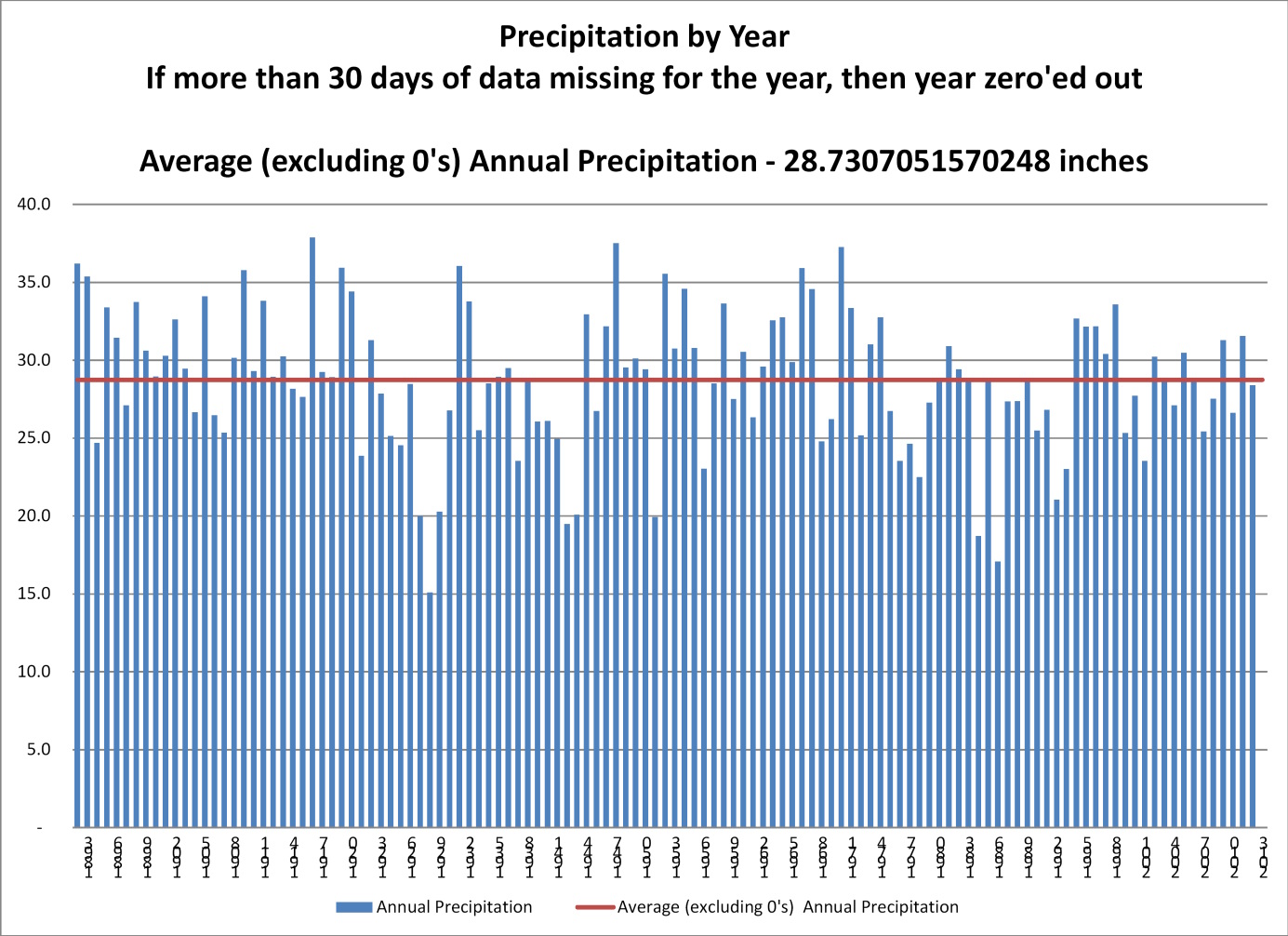 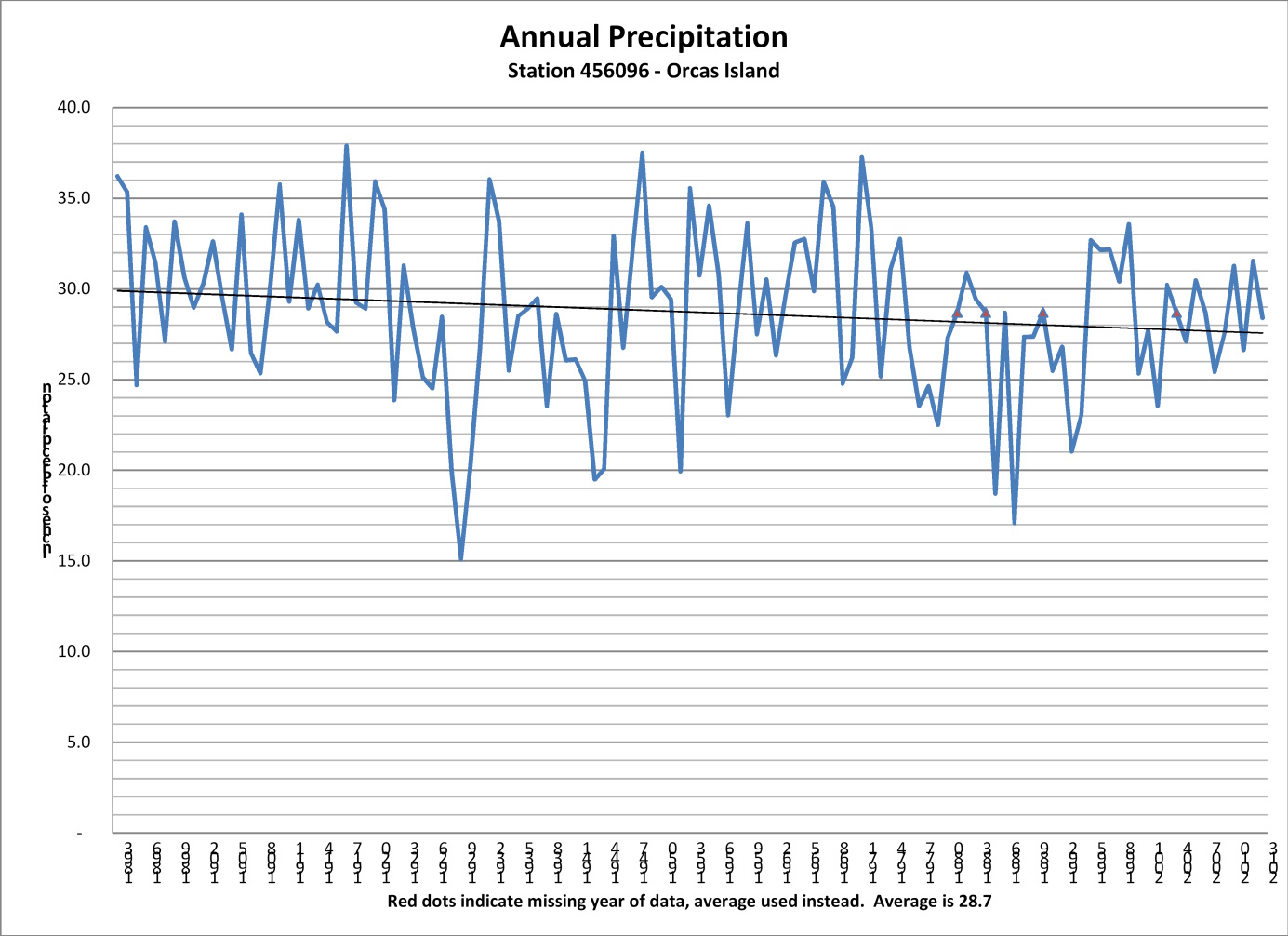 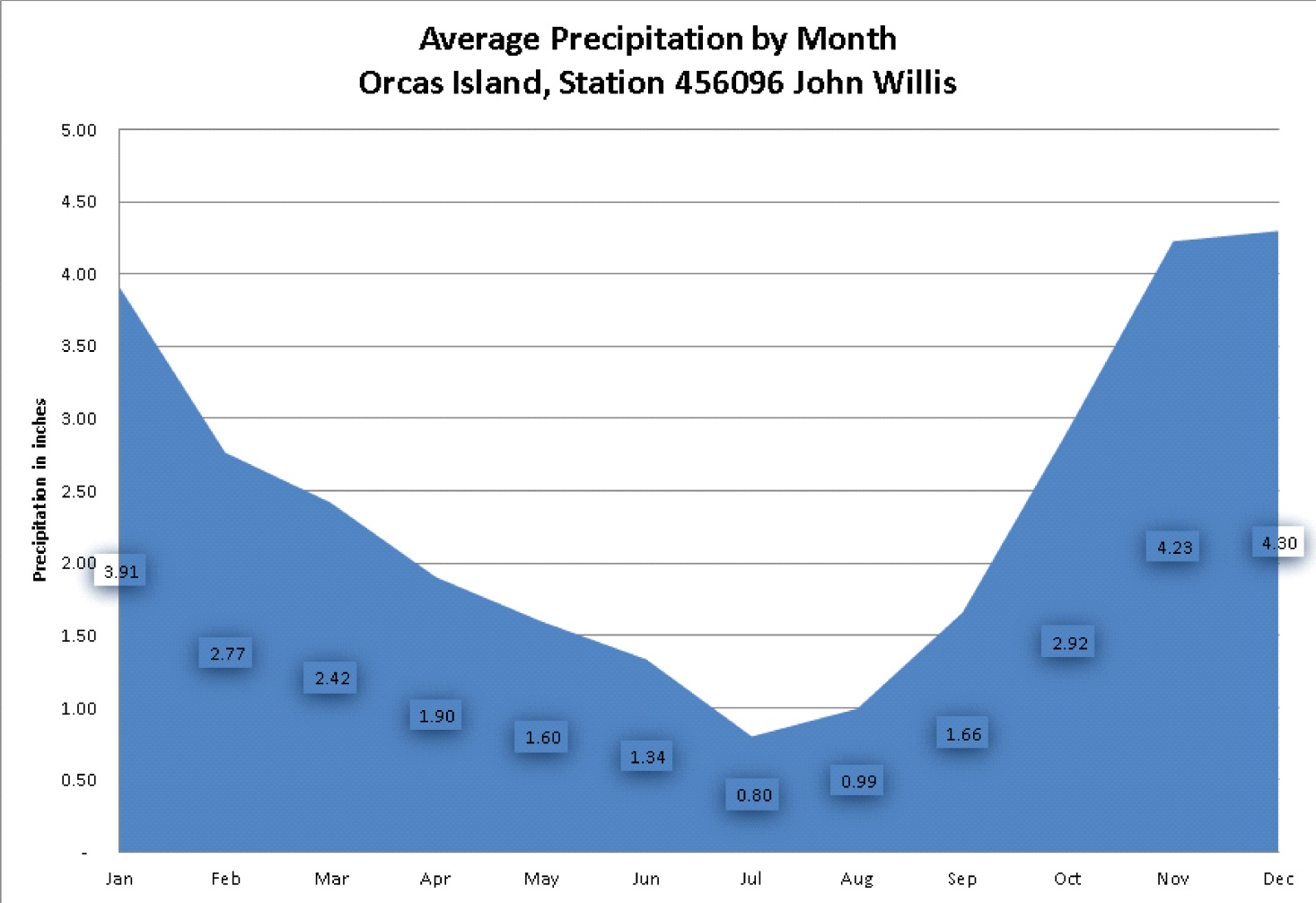