9:22pm here, and the sun just sank below the horizon!  We’ve been watching the Common Nighthawks dart around and dive.  Right before they “pull up,” that’s when their wings make the truck brake sound. And, I do think we have two different sounds going on. Nature’s noisy!

I think that, sometimes, it is the common nighthawk dive, but I think, sometimes, it is a deer grunt. The sounds are similar in vibration, but the tones are different pitches. Yesterday afternoon, the wood-on-wood sound most definitely came from the forest floor. I think that was the deer. I didn’t try to answer it, but I could safely have done so from the deck. Here’s a shot I took today with our Kindle. Not the best of photos, but you can see the sizeable head decoration. The adult deer here are about 3 feet tall (from the ground to their spine). 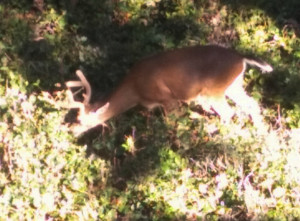 ​
The deer the youthful me apparently taunted to infuriation in South Dakota was larger and sporting a bigger headdress. A friend and I were standing by my car, parked at a clearing by the road. This was high up on a deserted, forested hill where we could overlook the valley below. We had our backs to the clearing. After a while, I heard grass rustling behind us, so I turned around to see a buck had just emerged into the meadow. He stood at the edge of the forest and stared at us for a bit before making a call. I don’t remember now what it sounded like; but, thinking he was trying to be friendly, I imitated him. Actually, I was quite impressed with myself for mimicking him so identically that he made the same call back, only a bit louder.

Hey, cool! I called back. He came closer, then snorted. I snorted back.

“Maybe he’ll get really close like the deer did up in the Rocky Mountains that time,” I thought. How exciting!

He took another step closer. I took a step closer to him. He called again. I responded. We were speaking the same dialect. We were bonding.

This is when he got really friendly and started running toward us like a loved one you haven’t seen in decades!

This is also when my friend screamed, “Get in the car!”

I look bewildered, I’m sure, as he pulled my arm to encourage me toward the shelter of the vehicle. When I saw the fire in the eyes of the creature, though, it dawned on me that perhaps this wasn’t a neighborly gesture.

We jumped in the car. The deer veered off into the forest.

“I thought we were going to be friends,” I said, still in awe of what just happened.

He smiled, shook his head, and said, “I think that charge was his answer to that.”

Humans can be a little friendlier, I admit. We went to the Orcas Island Solstice Parade today. A nice spectator beside me explained who was who as they frolicked by us. There was Penny, the woman who led the parade and has shown her talent in twirling the baton since high school. Then there was her son, the smiling, dancing sunflower. The toddler of a stilt-walker was enjoying a ride in a green wagon. Our little blue planet was carried up and down the parade route. It was quite a festive event. Even The Dust Bunnies played several jazzy numbers in the band shell. 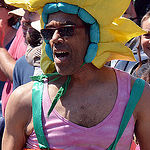 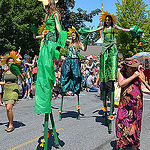 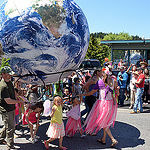 10 pm – The sky is still filled with sunset colors.

P.S.  We are thankful for the good rain we had on the 18th. It has been so dry. Orcas Island didn’t get the usual rains it gets in the Spring. Even the dried-out moss had been crunching and crackling underfoot. But, YAY!, it rained!  It wasn’t in the forecast, but I could see rain over the Olympics and the Strait in the distance.  Behold, it came this direction! 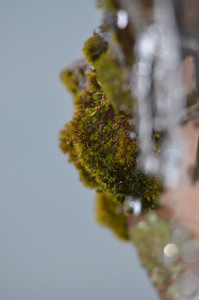